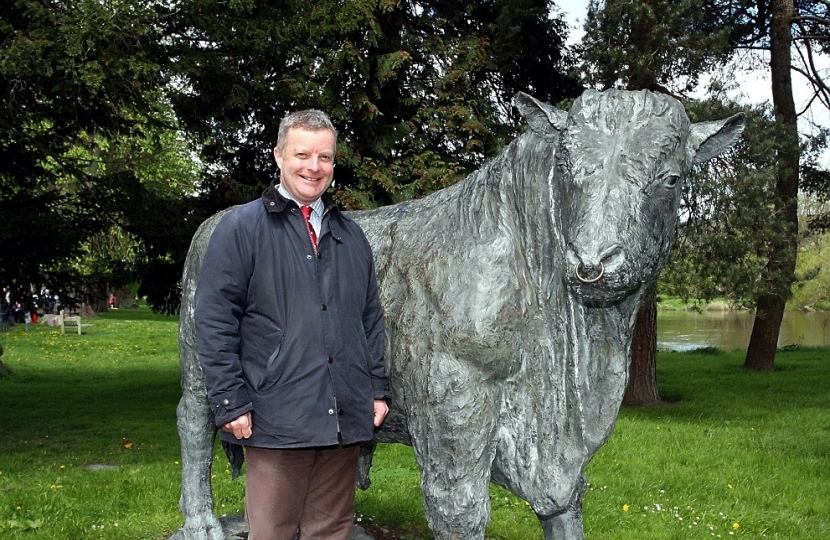 Chris Davies MP for Brecon and Radnorshire today delivered his Maiden Speech in the House of Commons. Chris's speech in full is below.

“It is a great privilege to stand before you today to make my maiden speech in a such an important debate, particularly as the Chancellor’s Conservative Budget is one of the greatest Budgets of modern times. It is also an enormous pleasure to follow my hon. Friend the Member for Kensington (Victoria Borwick), who delivered a wonderful maiden speech that puts me in a difficult position in following it.

I feel that, as a Welshman, I should—I must—tell the House a little story. I have to admit that this was not the easiest speech I have ever had to write. Many hon. Members might find this surprising, as one’s maiden speech should be the easiest of them all. In many ways it was, but in many others it was rather difficult. You see, since my election, my time in this House has been a total whirlwind. When I arrived in this place, I was given my pass and a laptop and set about meeting a great many people and discovering how this place works. I was rushed off my feet and time never seemed to stop.

That was until I came to write my maiden speech. I sat down at my desk, pen in hand, ready to go, but no words flowed forth. At first, I thought it could be the pressure I felt after listening to so many of my colleagues’ excellent maiden speeches, or the realisation that electioneering was now over and the real work would now begin—but I was wrong. As I looked out of the window at London, I realised that it is almost 180 miles from here to my constituency of Brecon and Radnorshire —the largest constituency in England and Wales, where the distance from Lower Cwmtwrch, below Ystradgynlais in the Swansea valley in south Breconshire, to Llanbadarn Fynydd in north Radnorshire is 85 glorious miles. As I sat in my office, I was a long way from my home in the village of Glasbury in the beautiful Wye valley, and a long way from my family—my wife and my two children. I will be honest—I felt very, very homesick. I wondered what I could do to make myself feel better so I decided to put down my pen and go for a walk; I thought that might make me cheer up and give me inspiration. I left my office and began walking.

The first place I came to was Central Lobby. I looked up and saw the mosaic of St David looking down on me. I smiled and thought of Wales and of how proud I am to be a Welshman—and proud to be a Unionist. I immediately began to feel a little less homesick. I then looked around and saw everybody waiting to meet their Member of Parliament, and I was reminded of my constituents and how honoured I am that they elected me with the largest majority in Brecon and Radnorshire for nearly four decades. I am truly indebted to them for

putting their faith in me to represent them, and I will do my utmost to repay that faith by always putting them and their interests first in this House.

I then left Central Lobby and entered Members Lobby, where I encountered the postboxes of Members of this House. I stopped and looked at all the names of current Members and thought of the names of all those who have had their postboxes here over the years. Roger Williams, my immediate predecessor, who I would like to thank for all of his hard work over the past 14 years, would have had his name here when he was campaigning for lower VAT on the tourism industry—a cause I also intend to champion. Jonathan Evans, my friend and my last Conservative predecessor back in 1992, who served as a junior Minister in John Major’s Government, would have had his name on a postbox. Even Walter D’Arcy Hall, my Conservative predecessor from 1924, whose heroics on the battlefields of world war one won him the Military Cross and Bar, would also have had his name there—though I do hope that my battles in this House are not as ferocious as his on the fields of northern France. As I stood in front of the postboxes, I realised that I too get to walk in their shadows and collect my post as they would have done.

I turned around and saw my Whip coming out of the Whips Office, ready to keep me in order. As he headed towards me, I was reminded of my wife back at home, so I quickly slid into the Chamber. It was there that I saw your Chair, Madam Deputy Speaker. I was reminded that as an auctioneer by trade and an announcer at the Royal Welsh show for more than 25 years, I have some understanding of the role that you undertake, although my time as an auctioneer was in the rural sector, encouraging animals to parade around the ring, preening and prancing and showing off their best sides—of course, that is very different from your role in this House, Madam Deputy Speaker.

Taking a load off my feet, after my thus far long walk, I sat down and took my place on these very green Benches. Looking at their colour, I was reminded of the green fields, valleys and hills of my constituency and of the enormous respect I have for those who farm the beautiful and varied acres that make up the rural counties of Brecon and Radnorshire. I thought of my election to the Select Committee on Environment, Food and Rural Affairs and how I cherished the opportunity to play my part in helping our family farms and young farmers’ clubs to continue to play a vital role as the backbone of our rural economy.

My eyes continued to gaze around the Chamber and I saw the crests and shields that adorn the walls. I remembered that they represent Members of this House who fell during active service in conflicts past. I was reminded of the armed forces that are based in Brecon and Sennybridge in my constituency, and the courage that those servicemen and women show day in, day out on our behalf.

Thinking about my constituency raised my spirits and I was beginning to feel less homesick. As I sat on the Bench, I listened to the speeches being made from the Government Benches and I was pleased to see so many of colleagues called to speak—and yes, their surnames were Davies. It felt just like being at home. I was reminded of the abundance of Davieses in the regiment of the South Wales Borderers, who won 11 Victoria Crosses in the battle of Rorke’s Drift, which was made famous by the film “Zulu” and brilliantly commemorated by the Regimental Museum of the Royal Welsh in Brecon—an organisation for which I am the resident fundraising auctioneer.

Having listened intently to my colleagues, I began to walk back to my office, feeling in much higher spirits, which only began to rise as I encountered a tour group walking around this beautiful Palace and thought of the excellent tourism industry in Brecon and Radnorshire, which plays host to some of the best events this country has to offer. Many in this place will have come to the Hay literary festival in Hay-on-Wye trying to sell one of their books—I hope that they were successful. [Laughter.] We have the Crickhowell and Talgarth walking festivals, the Llandrindod Wells Victorian festival, the Rhayader and Knighton carnivals and the Royal Welsh show, to which I will be delighted to welcome my right hon. Friend the Prime Minister for the second year in succession next week. Then, of course, we have the world alternative games at Llanwrtyd Wells, which includes the world bog snorkelling championship, where, I have no doubt, many in this House would excel if they attended.

As my walk came to a close, I was feeling much happier. I found myself in Westminster Hall. The glorious old building was full of visitors, staff members and even more tourists, but the people who caught my attention most were the schoolchildren. There were school parties of all ages, shapes and sizes in the hall and, as I climbed the stairs and opened the door to my office, I was reminded of schools in my constituency, including Gwernyfed high school, where I am a governor. Its future is currently under threat unnecessarily. I decided that I would continue to take a proactive role in promoting our schools’ interests to ensure that every child in Brecon and Radnorshire has the opportunity of the best start in life.

I sat down at my desk once more and realised that there were reminders all around me of my constituency, as Brecon and Radnorshire is as much this place as this place is Brecon and Radnorshire. I lifted my pen with a smile, for I no longer felt homesick. In fact, I felt right at home and, with that, my maiden speech was as good as written for me.”